Towards the end of 2013, Hopevale Trust sent help to the people of Antique who’ve suffered Typhoon Haiyan’s wrath last November. Antique is a province in the western portion of Panay Island, composed of 18 municipalities. Her northern towns suffered the most during the typhoon. Unlike many towns and cities of Samar, Leyte and Iloilo […] 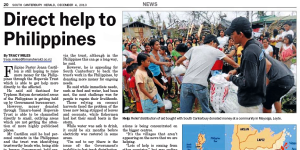 We celebrated Missions in the month of May. Appreciating the experiences in missions that were … END_OF_DOCUMENT_TOKEN_TO_BE_REPLACED

When I started joining a believers fellowship, we have a testimony sharing portion. It is the moment … END_OF_DOCUMENT_TOKEN_TO_BE_REPLACED

I will lift up my eyes to the mountains; From where shall my help come? My help comes from the Lord, Who made heaven … END_OF_DOCUMENT_TOKEN_TO_BE_REPLACED